The global gan power devices market was valued at $514.89 million in 2018 & is estimated to generate net revenue of approximately $2166.70 million by 2027, growing at a CAGR of 16.79%. For the market study of GaN power devices, the base year considered is 2018. The forecast period is between 2019 & 2027. Several factors that are responsible for market advancement include:

The global gan power devices market was valued at $514.89 million in 2018 & is estimated to generate net revenue of approximately $2166.70 million by 2027, growing at a CAGR of 16.79%. For the market study of GaN power devices, the base year considered is 2018. The forecast period is between 2019 & 2027. Several factors that are responsible for market advancement include: 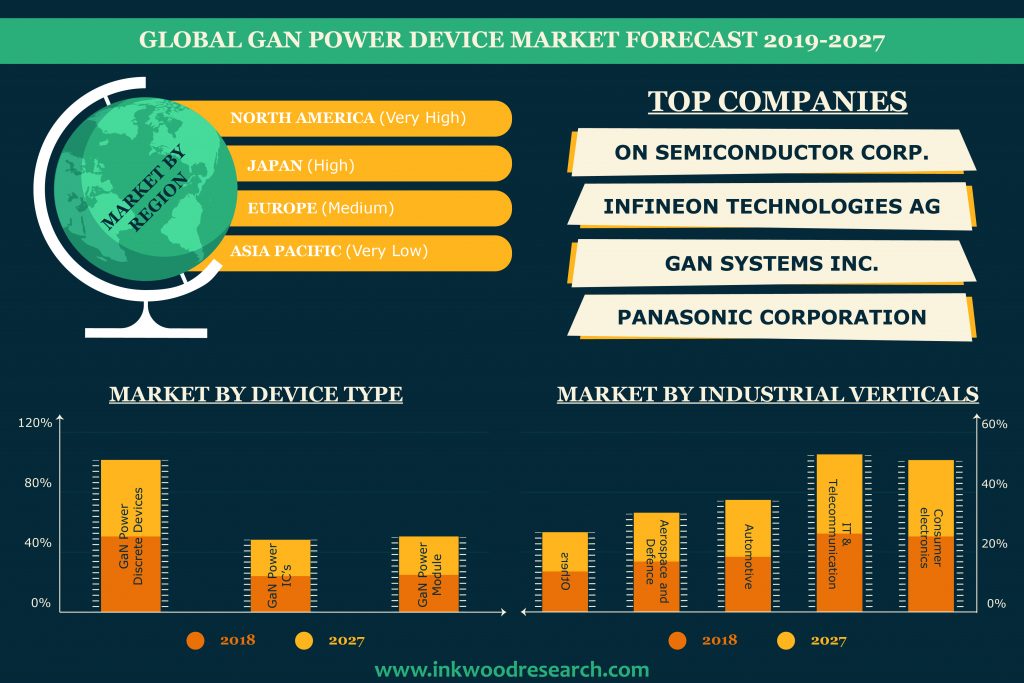 The global GaN power devices market has been segmented on the basis of its device type & by verticals:

The report scope is widely categorized on the basis of the device, which includes GaN power discrete devices, GaN power ICs & GaN power module. Moreover, the market revenue estimates & forecast includes revenue from the use of GaN power devices only & does not include revenues generated from the sales of GaN substrate.

On the basis of geography, the global GaN power devices market has been segmented into four major geographies:

The United States dominated the GaN power devices market since the first GaN-on-Silicon High-electron-mobility transistor (HEMT) was introduced in 2010 by International Rectifier. However, the Japanese GaN power devices market is expected to ramp up in the years 2017 & 2018. Further, it is anticipated that after 2018, South Korea & Taiwan’s market will capture a significant revenue share by 2020.

The North America GaN power device market is primarily driven by government initiatives for the production of GaN power devices. For instance, according to the department of energy, the US launched a Power America program, which set a goal that by 2030, XX% of all the U.S. electricity will flow through power electronics. To achieve this goal, Power America will work to make wide bandgap semiconductors such as GaN. Also, the North America region has the presence of a majority of the key players such as Efficient Power Conversion (U.S.), GaN Systems (Canada), Texas Instruments (U.S.), Cree Inc. (U.S.) & others. Thus, there are significant investments in the North American GaN market that supplements its dominance. Asia Pacific (including Japan) is the fastest growing regional market for GaN power devices. South Korea, Taiwan, China & Japan are the lucrative investment destinations in the Asia Pacific GaN power device market. The Asia Pacific market is primarily driven by the surge in the electric vehicles production, as we expect that gallium nitride based inverters would soon replace silicon power semiconductor devices that are used in electric vehicles. Additionally, the Asia Pacific GaN power market is also supported by the presence of major key players. These include Taiwan Semiconductor Manufacturing Company (Taiwan), Panasonic Corporation (Japan), Fujitsu (Japan), Toshiba Corporation (Japan), Mitsubishi Chemical Corporation (Japan) & others.

The global GaN power devices market is competitive. There are some players present in the market. Some of these major players include:

All these companies try to satisfy new customers & fulfil their fast shifting requirements. These companies also aim at acquiring start-ups & entering into partnership agreements to gain a competitive advantage. For instance, in October 2018, Cree, Inc. signed a long-term strategic agreement to produce & supply its Wolfspeed silicon carbide wafers to one of the world’s leading power device companies. In October 2018, Texas Instruments announced a new portfolio of ready-to-use, 600-V gallium nitride (GaN), 50-mΩ & 70-mΩ power stages to support applications up to 10 kW. Similarly, in September 2018, Teledyne e2v HiRel Electronics, a business unit of the Teledyne Defense Electronics Group, introduced a 650V GaN FET device that dedicates to the demanding HiRel applications. In July 2018, Efficient Power Conversion announced its product, the EPC2051, a 100V GaN transistor with a maximum RDS (on) of 25 mΩ & a 37 A pulsed output current for high-efficiency power conversion in a tiny 1.1mm2 footprint.

TABLE 2: PERFORMANCE COMPARISON OF GAN VERSUS OTHER SEMICONDUCTOR MATERIALS