Alzheimer’s Disease Therapeutics and Diagnostics Market to Exhibit a CAGR of 7.50% by the End of 2026

According to the new market research report published by Inkwood Research, the Global advanced phase change material market is anticipated to hit $  4,890.00 million by 2026. The market is evolving at 20.44% of CAGR during the forecasting years.

“According to a new market research report published by Inkwood Research, the Global Alzheimer’s diseases diagnostic and therapeutic market, which initially stood at $8653 million in 2017, is expected to generate $16169 million by the end of the forecast period of 2018-2026, exhibiting a CAGR of 7.50%”.

“Browse 27 market data Tables and 27 Figures spread over 206 Pages along with an in-depth TOC for the Global Alzheimer’s Disease Therapeutics and Diagnostics Market Forecast 2018-2026.”

High prevalence of Alzheimer’s in the world

Alzheimer’s is a progressive neurodegenerative condition that is mainly characterized by dementia and other cognitive disabilities. It is estimated that globally, about 47 million people suffer from this condition. The rising geriatric population across the globe is further expected to increase the prevalence of this disease in the coming years. Because of such alarming statistics, it has become imperative to introduce advanced diagnostics and therapeutic techniques into the market. Other factors, such as a rise in the healthcare expenditure of the people and rising investments by governments for research and development are further contributing to the expansion of the global Alzheimer’s disease therapeutics and diagnostics market.

Pipeline drugs to show a significant CAGR in the therapeutics market

Pipeline drugs are those drugs that are presently undergoing development and clinical trials before being introduced into the market. Pipeline drugs for Alzheimer’s disease are gaining huge popularity due to unmet medical needs of the patients. Pharmaceutical companies like Pfizer Inc., GlaxoSmithKline PLC, Sanofi, and Johnson & Johnson are being influenced by these factors to enhance their R&D. For instance, according to Pharmaceutical Research and Manufacturers of America, several American biopharmaceutical research companies are investigating for nearly 85 new drugs that are expected to provide therapeutic treatment for Alzheimer’s.

Computed tomography (CT) is a technique that combines distinct x-ray equipment with sophisticated computers to produce detailed images of the human body. By analyzing the CT of the brain for sub-dural hematoma, stroke or tumors, doctors can better monitor the patient’s cognitive state. Other key diagnostics that are popular in the global Alzheimer’s therapeutics and diagnostics market include positron emission tomography, lumbar puncture test, magnetic resonance imaging and electroencephalography. 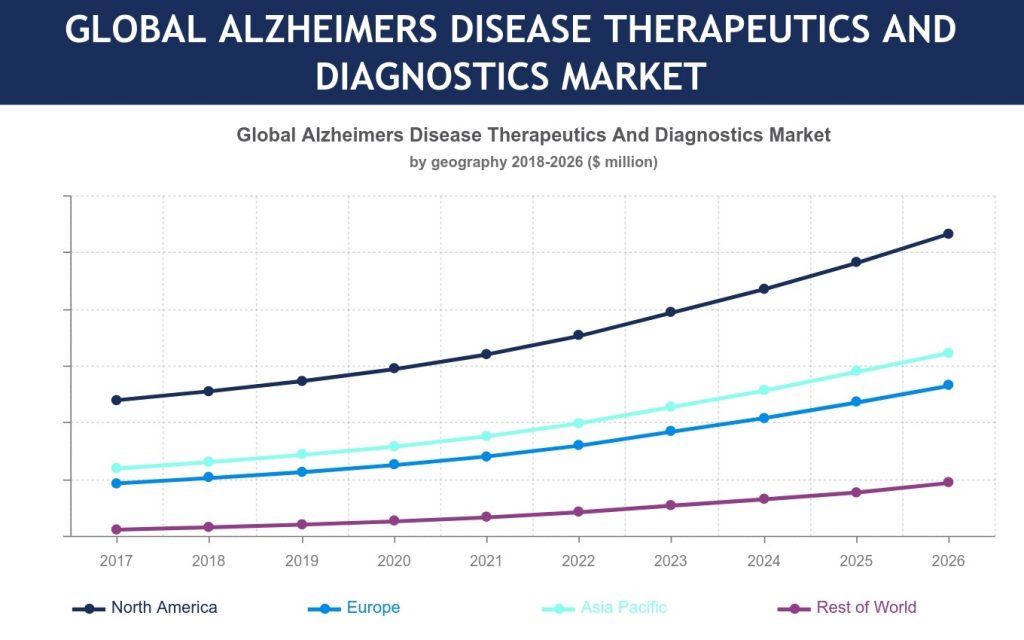 To learn more about this report, request a free sample copy

Alzheimer’s Association reported that in the year 2017, nearly 5.5 million Americans suffered from Alzheimer’s dementia.  Therefore, the use of Alzheimer’s disease diagnostic technologies in drug development has become critical in this region. The sales of extended-release formulations such as Namenda and Namenda XR have also witnessed a boost in this market. Reportedly, the National Institute of Health has spent around $589 million on research projects for further augmenting the growth of Alzheimer’s disease therapeutics & diagnostics market in the region.

Over the projected years of 2018-2026, the market prospects for the Global Alzheimer’s disease therapeutics and diagnostics market looks quite profitable and as a result, noted pharmaceuticals companies like Piramal Enterprises Ltd, Axon Neuroscience Se, F. Hoffmann-La Roche Ag, Siemens Medical Solutions, Ge Healthcare, and Baxter International Inc are increasingly competing with each other to establish their sovereignty.