A smart speaker is a type of wireless speaker and voice command device with an integrated virtual assistant (artificial intelligence) that offers interactive actions and hands-free activation with the help of one “hot word”. Some smart speakers can also act as a smart device that utilizes Wi-Fi, Bluetooth and other wireless protocol standards to extend usage beyond audio playback such as to control home automation devices.

Global Smart Speaker Market, which is segmented by Intelligent Virtual Assistance (Alexa, Google assistant, Siri, Cortana and Others), by End User (Personal use, Commercial use), by Distribution Channel (Online, Offline)  & by Geography

A smart speaker is a type of wireless speaker and voice command device with an integrated virtual assistant (artificial intelligence) that offers interactive actions and hands-free activation with the help of one “hot word”. Some smart speakers can also act as a smart device that utilizes Wi-Fi, Bluetooth and other wireless protocol standards to extend usage beyond audio playback such as to control home automation devices. This can include (but is not be limited to) features such as compatibility across a number of services and platforms, peer-to-peer connection through mesh networking, virtual assistants and others.

Global smart speakers market is anticipated to grow with 24.91% CAGR during the forecast period 2019-2027. The base year considered for the study is 2018.

The smart speakers market is increasing because of the following factors: 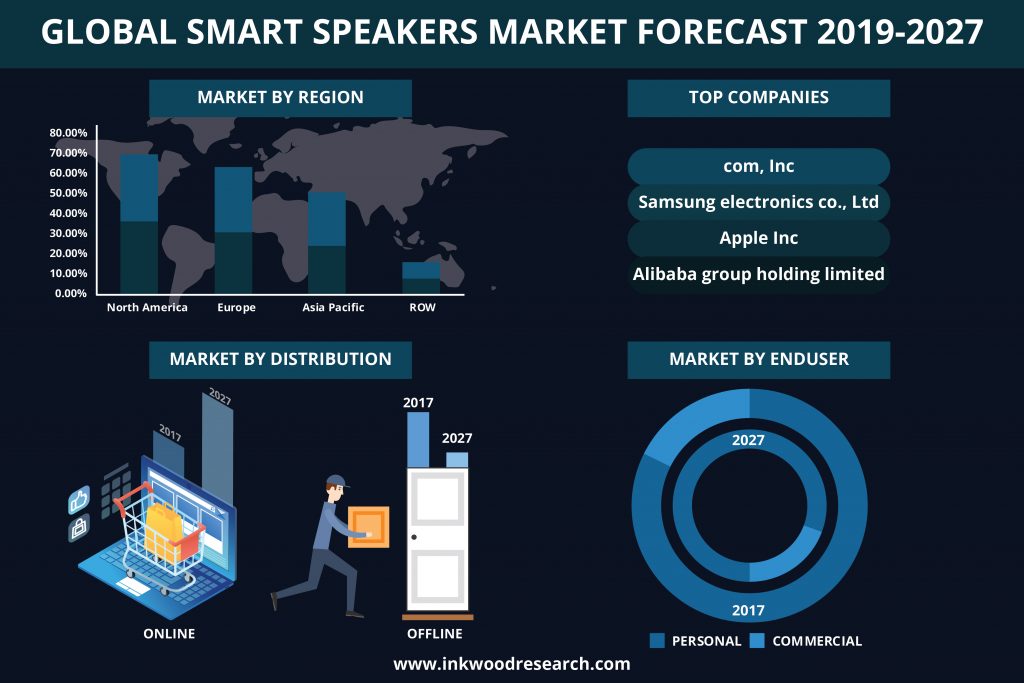 To learn more about this report, request a free sample copy

However, the global smart speaker market is driven by the rapid increase in the usage of smart devices at home. The digital revolution (especially in the world of IoT) has fueled an exciting new phase with companies in the home automation industry, offering consumers new and improved smart home technologies and giving rise to an interconnected, easy-to-control environment termed as “smart home.” These devices offer consumers remote control monitoring of common household devices and improved utility savings. The growth is attributed to a number of factors, including the decreasing cost of smart home technologies, current government policies and increasing customer awareness of the product.

In terms of intelligent virtual assistant segment, Alexa leads the market in terms of revenue with around XX% market share in 2018. Amazon’s Alexa holds the largest market share of more than XX% in the year 2018. Alexa is getting tough competition from Apple’s Siri & Goggle’s Assistant. Both the virtual assistant technology are expected to grow at a rapid speed. Most devices with Alexa allow users to activate the device using a wake-word (such as Alexa); other devices require the user to push a button to activate Alexa’s listening mode. Alexa offers weather reports provided by AccuWeather and news provided by TuneIn from a variety of sources including local radio stations, NPR, and ESPN.

As the usage of smart speakers is growing rapidly, it will also have some hindrances associated with it. Some of them are security & privacy challenges, language support in voice assistants, lack of knowledge base & entering the newer market through advancements in technology. Security & Privacy is the most important aspect which companies are working on to improve. The connected home may contain sensitive data (e.g. personal photos, videos, and digital diaries), and devices such as IP cameras that may be remotely activated and accessible from anywhere. Additionally, it may feature microphones that may listen to private conversations. For instance, smart speaker systems such as Amazon Echo and Google Home feature microphones that are programmed to listen to ‘wake up’ commands and voice input to complete tasks such as dimming lights and playing music. This makes the need for stringent security requirements due to the importance of private information.

This report covers the present market conditions and the growth prospects of the global smart speakers market over the forecast period of 2019-2027. The report considered the revenue generated through the sales of smart speakers for types, as to calculate the market size by considering 2018 as the base year.

Geographically, the global smart speakers market has been segmented on the basis of four major regions, which include:

The regional structure of smart speaker market is dominated by North America region by capturing largest market share in terms of revenue of XX% in the year 2018. North America has been accounted as the region witnessing the most number of buyers. One of the major reasons for the highest revenue of this region is the presence of a large number of leading manufacturers such as Google, Apple, Harman International, and Amazon.com. These leading vendors have captured the market and have a higher reach in the country due to their extensive marketing campaigns. On the other side, Asia Pacific is the fastest growing region anticipated to grow at the highest CAGR of XX% during the forecast period and is anticipated to reach $ XX million by 2027. The focus of manufacturers to launch smart speakers and smart living appliances enabled by IoT solutions in the Asia-Pacific region influences the growth of the smart speaker markets. Hence, there is an increased investment in the field of smart gadgets and technologies. Also, the household spending of China increased at a rate of XX% in 2017 and is expected to grow at a positive rate in the future because of the rise in disposable income. The internet penetration in China was XX% in 2017 and is expected to increase in the future. The entry of large internet/tech companies, such as Alibaba T-Mall, Xiaomi, Tencent, Baidu, and Lenovo, since the latter half of 2017 is the major factor stimulating the growth of the Chinese smart speaker market. The partnerships of some of these major companies with Chinese AI startups specializing in natural language processing and other voice technologies has enabled them to develop smart speakers suitable for the Chinese audience.

The major market players of the global smart speakers market are:

Market share analysis along with company profiles of the prominent market players are discussed in detail. Amazon announced the Fire TV Stick 4K, the most powerful streaming media stick available, plus an all-new Alexa Voice Remote, available together. The all-new Alexa Voice Remote is also available with the recently launched Fire TV Cube and can be purchased as a single remote. Amazon introduced a new line-up of Echo devices, Echo companion devices, and Amazon smart home devices, making it even easier to bring the features and convenience of Alexa to any room and car. Samsung Electronics Co., Ltd., a world leader in advanced semiconductor technology, announced that it had developed Exynos Modem 5100, the industry’s first 5G modem that is fully compatible with 3rd Generation Partnership Project (3GPP), the most up-to-date standard specification for 5G New Radio (5G-NR). Built on power-efficient 10-nanometer (nm) process technology, the new modem also supports legacy radio access technologies designed into a single chip.