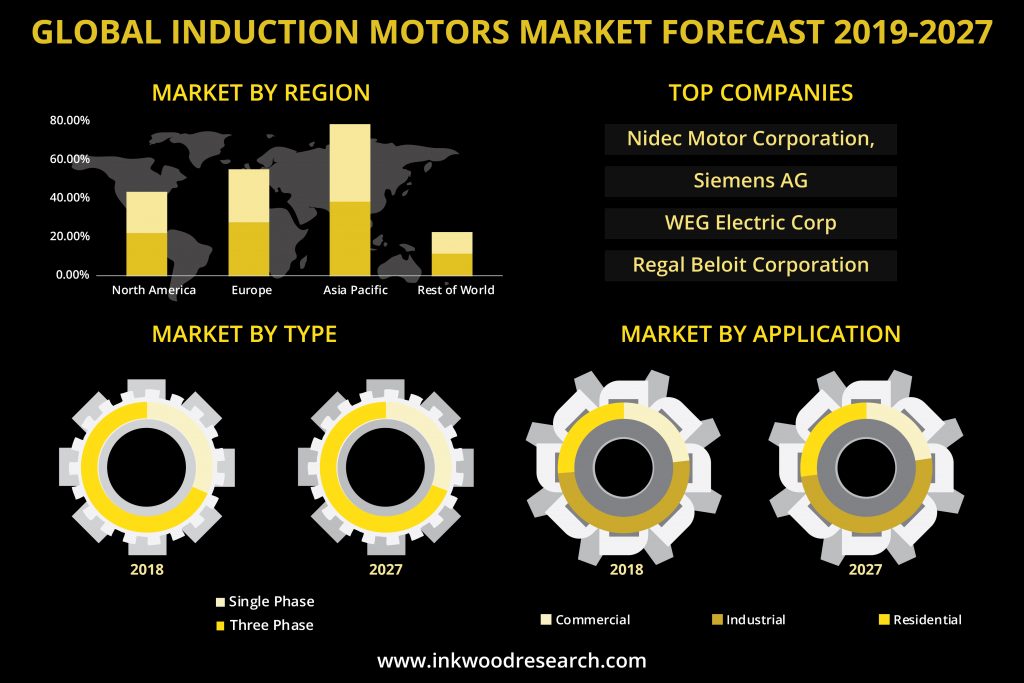 Global induction motor market is primarily driven by the rising demand for electric vehicles, technological advancement, and the rapid rate of industrialization in emerging countries. There is a tremendous pressure on countries at a global forefront to cut the greenhouse gases emission. For this, they are promoting electric vehicles globally. On 12 December 2015, the “Paris agreement” was signed by 175 countries which aimed at reducing the global CO2 emission by XX% by the end of 2025.

Industrial application is the leading segment in terms of revenue in the global induction motor market, with around 50% market share in 2018. The dominance of the industrial application is primarily attributed to the growing industrial sector across countries. As per the United Nations Industrial Development Organization, global manufacturing value added is estimated to rise by XX% in 2016. In addition, the shift towards industrial automation, coupled with the rising consumer confidence & promising investment plans triggers demand for the induction motor in industrial application. Furthermore, the advent of Industry 4.0 enables a wide adoption base for the induction motors. Also, as per the United Nation’s Industrial Development Organization, the global manufacturing output is anticipated to rise by XX% in Q2 2017 as compared to XX% in Q2 2016.

Moreover, the residential application segment is anticipated to grow at the highest CAGR of around XX% during the forecast period. The fastest growth rate of the residential sector is attributed to the increasing demand for household appliances, increasing urbanization, smart homes, digitalization & others. According to the Technical Report, M2M/ IoT Enablement in Smart Homes, the smart home penetration in North America in 2016 was XX%, while Asia Pacific remained at XX% & Europe recorded XX%.

With increasing adoption of induction motors, newer challenges have been introduced in the market. The market is highly fragmented, with intense rivalry among local & international vendors. Many major vendors are finding it hard to contend with low-cost manufacturers from China. The low entry barrier has made the market even more competitive. The economic slowdown has also ensured that companies have to lower their prices to increase their sales in the market.

Furthermore, the rising price of raw materials affects manufacturers’ profit margins & their pricing strategies. The main raw materials, including steel, aluminum, & copper have so much volatility in their pricing that it not only affects the availability to vendors but also plays a direct role in their operational costs. Moreover, the high installation cost of the manufacturing facility is another major factor that is restricting the growth of the global induction motor market.

To calculate the market size & vendor share, the report considers revenue generated from the sales of different types of induction motors & revenues from sales amongst the various end-users.

On the basis of geography, the global induction motors market has been segmented into four major regions:

Geographically, Asia Pacific is expected to hold the largest market share, i.e., 38.66% in terms of revenue with approximately $XX billion in 2018. The Asia Pacific induction motor market growth is justified by the increasing demand from the electric vehicles & the growth in the HVAC (Heating, ventilation, & air conditioning) industry.

Similarly, rapid industrialization & increasing manufacturing sector in countries such as China and India are pouring the demand for numerous end-user applications of induction motors.

Further, as per the United Nations Industrial Development Organization (UNIDO), the manufacturing growth across the Asia Pacific was expected to rise to XX% in the 2nd quarter of 2017 as compared to XX% in 2nd quarter of 2016. Moreover, the demand for electric vehicles & government initiatives to reduce greenhouse gas emissions also drive the Asia Pacific induction motor market. For instance, the Chinese government provides rebates in vehicle registration fee & purchase tax for all varieties of electric vehicles such as fuel-cell, pure electric & plug-in hybrid vehicles. The Japan Government also provides special allowance by not charging acquisition & tonnage tax to the electric vehicles.

The market has some players & some of the key players involved in global induction motor market are as follows:

Market share analysis, key company analysis, key corporate strategies along with company profiles of the key companies are discussed in detail. Most of the companies look for strategies such as merger & acquisition, partnership, contracts, agreements, or new product launch to gain a competitive edge over each other. For instance, In October 2018, Nidec Motor Corporation (NMC) introduced TITAN® II WPI and WPII 449 frame vertical motors available in both HOLLOSHAFT® and solid shaft constructions.

In October 2018, WEG Japan was awarded an important contract for the supply of four Flameproof Tube-Cooled motors and spare parts for a large scale fertilizer production plant in the Middle East area.

In July 2018, Nidec Corporation acquired CIMA S.p.A, an Italian commercial motor manufacturer. In April 2018, General Electric Corporation completed its no-load testing of an 80 MW two-pole induction motor for the LNG industry in its factory in Nancy, France. In January 2018, Regal Beloit Corporation unveiled the Ensite® motor, which is specially designed for furnace applications.

In May 2017, Johnson Electric’s operational division, the Industry Products Group (IPG) launched a motor production line to serve the appliance industry in Argentina.

FIGURE 2: WAGES RELATED WITH AUTOMATABLE ACTIVITIES ACROSS THE WORLD

FIGURE 15: INVESTMENT ANALYSIS OF INDUCTION MOTORS MARKET, BY REGION, IN 2018

FIGURE 16: INVESTMENT ANALYSIS OF INDUCTION MOTORS MARKET, BY APPLICATION, IN 2018

FIGURE 17: INVESTMENT ANALYSIS OF INDUCTION MOTORS MARKET, BY TYPE, IN 2018