The global CRISPR market is anticipated to grow at a CAGR of 32.04% between 2019 and 2027. The major factor boosting the CRISPR technology market is the rising prevalence of genetic disorders. Also, the emergence of new entrants in the market is giving a certain pace to the market leading to the development of better and reliable techniques. The following factors primarily are driving the CRISPR market: 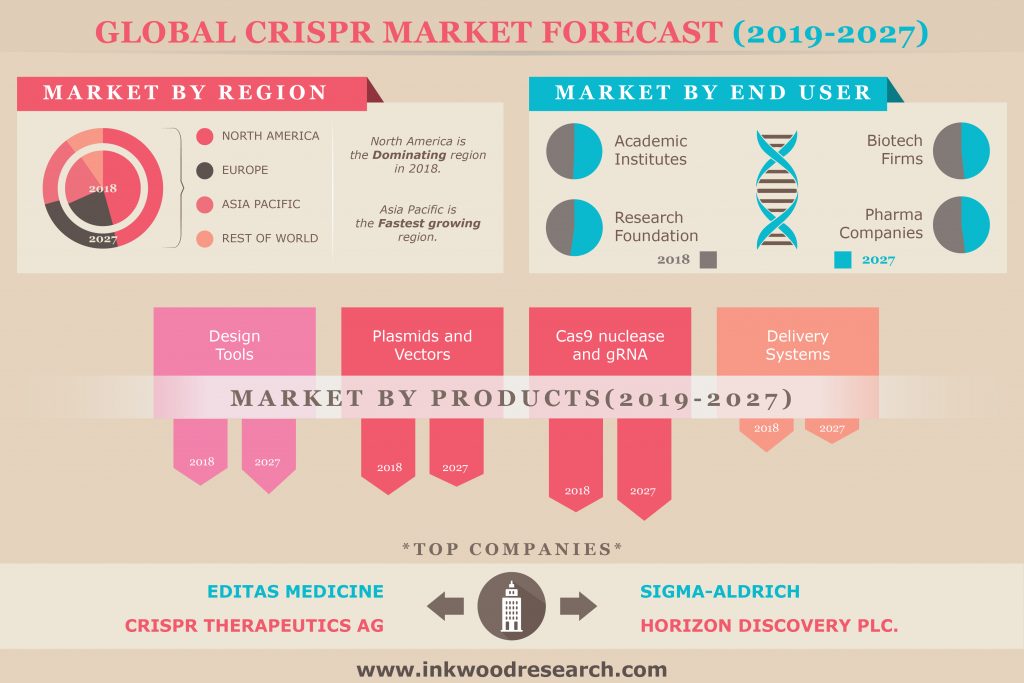 To know more about this report, request a free sample copy

The important drivers increasing growth in the global CRISPR market are the increasing demand for drug discovery and the rising size of the geriatric population. Drug discovery technology market plays a significant role in the domain of pharmaceuticals as they are crucial for the introduction of new drugs to the market. Due to the increasing application of drugs, there is a huge opportunity in the drug discovery market for the invention of drugs for severe diseases like CVD, cancer and many more. The major influence on the pattern of healthcare spending in both developed and developing countries is the aging population in developed countries such as Western Europe, the US, etc. were the proportion of aged people that primarily utilize the healthcare services is high, due to the availability of various institutional long-term care services and medical policies.

CRISPR technology is used extensively applied for various purposes. Genome editing or genetic engineering helps in modifying an organisms genome, where deletions, insertions or replacements are carried out in the DNA of the living organism by the help of molecular machinery and engineered nucleases. Gene library refers to the gathering of cloned deoxyribonucleic acid (DNA) fragments that carry the information regarding the gene function. Clustered Regularly Interspaced Short Palindromic Repeats (CRISPR) plasmids are extensively used for gene disruption and direct repair of the homologous gene. Stem cells are the basic foundation of each tissue and organ in our body. A genetically modified organism (abbreviated as GMO), is an organism in which the DNA can be altered by using genetic engineering techniques. Cell lines are a group of cells developed from a single cell and have the same genetic make-up.

Lack of awareness and the probable misappropriated use of the CRISPR gene editing tools are the major factors hindering the CRISPR market growth. This technology suffers from a serious problem in the developing countries like those of Asian and African region, where the supposed users are unaware about its huge application in several important research projects in developed nations of North America and Europe. CRISPR is related to several applications such as genome editing, genetic engineering, etc. which are considered controversial to run in the human model systems due to the ethical concerns.

The global CRISPR market is segmented into applications, products, and end users.

Applications are sub-segmented into:

Products are sub-segmented into:

End users are sub-segmented into:

This report covered the present market conditions and the growth prospects of the global CRISPR market for 2019-2027 and considered the revenue generated through the sales of CRISPR for products as well as an end user to calculate the market size by considering 2018 as the base year.

Geographically, the global CRISPR market has been segmented on the basis of four major regions, which include:

On the other hand, the Asia-Pacific market is anticipated to be the fastest-growing region in the global CRISPR market. Here, Japan and China have impressive emerging economies, and the highest number of the geriatric population is also present in these two countries. A large chunk of the population of Japan and China is suffering from diabetes and other peripheral diseases, and the prevalence of these diseases is expanding at an uncontrolled pace. A large number of diabetic patients are young. Currently, in India, there are approximately sixty-four million people who are diagnosed with diabetes, among which, half of them belong to the young age category, and the rest belong to the geriatric population and children below 15 years.

The CRISPR market is segmented by end users, who are further sub-divided into biological research, agricultural biotech, industrial biotech & therapeutics, and drug discovery. Upon segmentation on the basis of products, the market is sub-segmented into designing tools, library, control kits, plasmids, vectors, proteins, gRNA, and other products. CRISPR technology has paved the way to characterize and analyze the root cause of various chronic disorders and provide gene therapy procedures for the treatment of such disorders. The biotechnology companies are the major consumer of CRISPR gene editing tools.

A plasmid is an extra-chromosomal DNA molecule found in bacteria. Arrayed libraries are used to explore the applications of CRISPR-Cas9 technology into high throughput genome editing screening for functional genomics. Proteins play a fundamental role in the success of the CRISPR technology experiment. The construction of gRNA plays a significant role in obtaining the desired results.

The major market players in the global CRISPR market are:

TABLE 6 TOOLS NAME AND THEIR PROVIDERS

TABLE 23 BARRIERS TO ENTRY IN THE AGRICULTURAL SEED MARKET

FIGURE 1 CAUSES OF DEATHS DURING 2016, WORLDWIDE

FIGURE 2 FATALITIES INCREASING DUE TO LIFESTYLE ORIENTED DISEASES (IN THOUSAND)

Request For A Free Sample