Search for a report

The global battery market was valued at $XX billion in 2018 and is projected to grow with a CAGR of 6.63% during the forecast period, to reach an expected value of $135.43 billion by the year 2027. The base year considered for the study is 2018 and the estimated period is between 2019 and 2027. The battery market is expected to witness significant growth over the forecast period owing to:

The global battery market was valued at $XX billion in 2018 and is projected to grow with a CAGR of 6.63% during the forecast period, to reach an expected value of $135.43 billion by the year 2027. The base year considered for the study is 2018 and the estimated period is between 2019 and 2027. The battery market is expected to witness significant growth over the forecast period owing to: 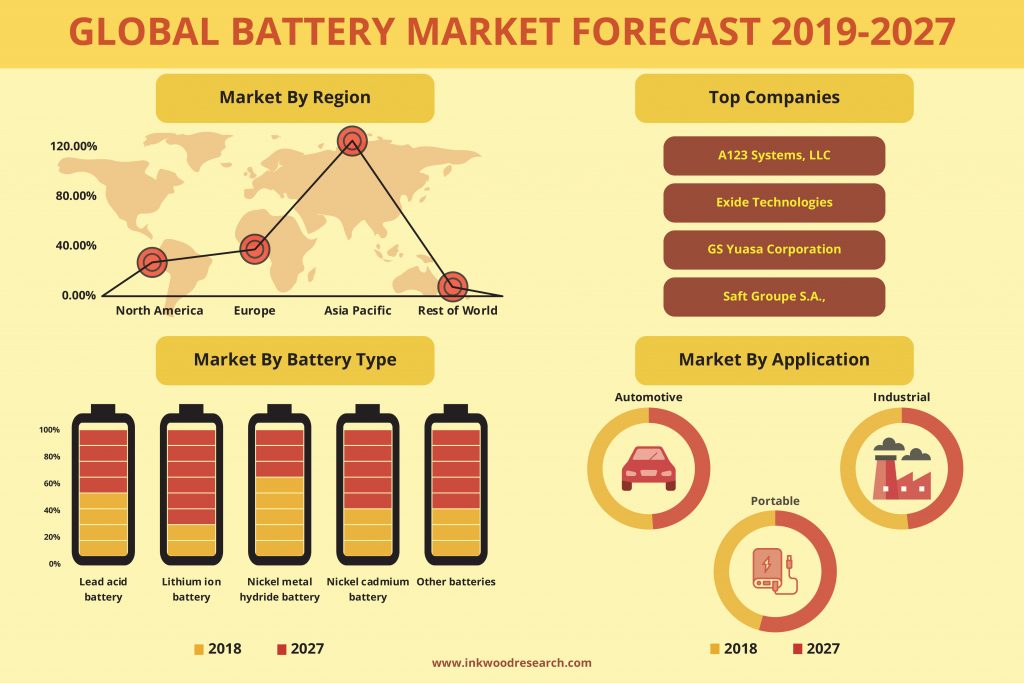 The global battery market is expected to witness significant growth over the coming years owing to the development of the automobile and motorcycle industry. The growing preference for pollution-free hybrid & electric vehicles along with technological developments is expected to drive battery demand over the forecast period. The increasing technological advancements in battery technology have increased the usage of various battery-operated devices across the globe. Furthermore, the decreasing cost of lithium-ion batteries and surging energy storage deployments in power grids have also largely impacted the growth of the market. A few years back, the lithium-ion batteries cost around $XX per kWh that has lowered to about $XX per kWh as of the year 2016.

Lead acid battery captured the largest revenue share of 52.40% in 2018. Lead-acid is used in automotive, stationary, and deep-cycle batteries. These batteries have held a strong position in the overall battery market for more than 100 years.

However, lead-acid batteries are expected to lose their dominance due to pollution & Operational challenges related to these batteries coupled with the emergence of new technologies such as nickel-metal hydride (Ni-MH) and Li-ion batteries. The growing consumption of lead-acid batteries for large ESS has resulted in the formation of deposits on negative electrodes, which hinder the performance of energy storage systems.

Moreover, the recycling of lead-acid batteries reduces the number of disposable batteries as solid waste; but, as batteries contain a high amount of lead oxide toxins, they affect the environment. However, lithium-ion batteries are expected to capture a significant portion of the market over the forecast period on account of low energy density and lightweight. Li-ion batteries are rechargeable batteries. The advantage of using Li-ion batteries is that they increase the thermal stability, have higher current density, and longer shelf life as compared with other batteries available in the market. Li-ion is used in high power applications such as HEVs, EVs, and consumer electronic devices. One of the key reasons for its significant growth is the growing use of EVs and HEVs worldwide. Currently, this transportation sector has the highest demand for Li-ion batteries. The increase in renewable power generation will also drive the growth of the market during the forecast period.

With the growing adoption of batteries from numerous end user industries, the global battery market is also facing some challenges. Uncertainties in raw material prices, operational issues & pollution due to lead-acid batteries, the growing threat of alternatives such as supercapacitors & counterfeit batteries are several factors hampering the market growth.

The report on the global battery market is segmented on the basis of battery type and application.

Geographically, the global battery market has been bifurcated into four major regions, which covers:

In terms of geography, Asia Pacific was the largest market, accounting for 60.51% of the global battery market in 2018. Also, the market in the Asia Pacific is advancing with the fastest rate owing to an increase in battery demand in developing countries such as China and India. Asia-Pacific battery market is mainly driven by the investments made by the private organizations, escalating adoption & utility of electric vehicles, rising research & development by the research institutions and initiatives taken by the multinational organizations which are focusing on developing batteries.

The robust manufacturing base of the lead-acid battery in China, Japan and India along with the commitment of governments towards infrastructure development are expected to increase the battery market. Substantial demand for the automotive industry, which is one of the largest end users of battery, across the countries like India, Indonesia, Sri Lanka, and Vietnam are expected to augment the market growth.

Commercial, residential and grid storage is expected to witness significant growth on account of various factors including industrialization, urbanization and increased disposable income in the developing countries coupled with favorable regulations to attract investments is expected to have to augment market. The lower battery price offered by local manufacturers compared to the leading vendors is also expected to contribute to the market growth.

The prime companies operating in the global battery market include:

Key corporate strategies along with company profiles of the key companies are discussed in detail. Most of the companies look for strategies such as merger & acquisition, partnership, contracts, agreements, or new product launch, to gain a competitive edge over each other. For instance, in February 2019, EnerSys expanded the capacity range for its line of PowerSafe® DSG batteries from 295-745 amp hours (Ah) to 295-1,600 Ah. In January 2019, Toyota Motor Corporation and Panasonic Corporation announced that the two companies would establish a joint venture to produce prismatic lithium-ion batteries, solid-state batteries, and next-generation batteries for electric vehicles.

In September 2018, A123 Systems invested $20 million in Series A funding in Louisville, Colorado-based Solid Power, a maker of batteries. In June 2018, East Penn Manufacturing and RSR Technologies renewed and extended their lead battery research agreement with the U.S. Department of Energy’s Argonne National Laboratory.